If I prove that you have a speck in your eye, I have NOT proven that I don’t have a plank in my eye.

At the end of his Sermon on the Mount, Jesus warned everyone who hears his words and does not put them into practice: they are like a foolish person who built their house on sand. “The rain came down, the streams rose, and the winds blew and beat against that house, and it fell with a great crash.” (Matthew 7:26-27).

There are many ways that people fail to put the words of Jesus into  practice. In my blogs titled “Building Houses on Sand”, I point out some of the most common errors that people make.

One common error is thinking that if I prove that someone else did something bad, this proves that I did NOT do something bad.  This error is akin to looking at the speck of sawdust in the other person’s eye while paying no attention to the plank in my own eye. (Matthew 7:3-5).

For example, if Tom is on trial for robbing a bank in New York City, he has NOT proven his innocence by proving that Sue robbed a bank in Chicago. Obviously, Tom and Sue can BOTH be bank robbers!

This error is especially apparent when politicians engage in negative attacks on their opponents. If Tom is charged with being corrupt, he has NOT proven his innocence by proving that Sue is corrupt. Obviously, Tom and Sue can BOTH be corrupt!

A civilization that is ruled by corrupt people who defend themselves by charging that others are corrupt is indeed like a foolish person building a house on sand. When rain comes down, when streams rise, and when winds blow and beat against that house, it will fall with a great crash.

For more of my thoughts based on the Sermon on the Mount, please read my book Hoping in the LORD, at pages 119-122.

For another blog about the importance of removing the plank in my eye before I try to remove the speck in your eye, please read my blog “Deceptive-Drawings-Designed-To-Deceive-And-Divide”. 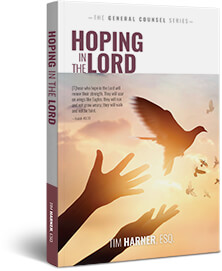