Nimrod and Babel did not understand what makes people, nations, and civilizations “great.”

(First published in 2004 as “Nimrod’s Wars & Babel’s Arrogant Selfishness” in my book The Promised Land.)

Greatness does not come from winning wars.

Greatness does not come from building the tallest “tower.”

Greatness comes from being a blessing to other people.

Greatness comes from having the faith to go to that “Promised Land” where “all peoples on earth will be blessed through you” (Genesis 12:3).

Abraham grew up in a civilization that was shaped by the wars of Nimrod.

Instead of hoping in the LORD, Nimrod relied on his skills as a “mighty warrior” to establish an empire across much of the Middle East (Genesis 10:8-12). In contrast, Abraham did not seek to establish a mighty empire through war. Abraham sought to establish the family of God through faith.

Abraham grew up in a civilization that was shaped by the arrogance and selfishness of Babel.

In the beginning, people were unified because “the whole world had one language and a common speech” (Genesis 11:1). Their civilization generated technological advances. People learned how to use “brick instead of stone, and tar for mortar” (Genesis 11:3).

In a burst of optimism, people decided to “build ourselves a city, with a tower that reaches to the heavens” so that we may make a name for ourselves and not be scattered over the face of the whole earth” (Genesis 11:4). These people did not need a tower “that reaches to the heavens” in order to overcome a lack of office space in downtown Babel. This tower would have been a “ziggurat” such as those that have been unearthed by archaeologists in ancient cities in Mesopotamia. Babel wanted such a tower as a symbol of civic pride.

It’s good for people to have “civic pride.” Such “civic pride” motivated Jerusalem to build Solomon’s Temple, Athens to build the Parthenon, Paris to build Notre Dame, Rome to build the Sistine Chapel, and countless modern cities to build sports arenas. (Notice any decline in “civilization” in modern times?)

But in Babel the virtue of “civic pride” became perverted into the vices of arrogance and selfishness.

To show that they were better than anyone else, they boasted that they would build a “tower that reaches to the heavens!” That way even God could see how great they were—true legends in their own minds!

Their arrogance was surpassed only by their selfishness.

The LORD didn’t like what he saw. He realized that: “If as one people speaking the same language they have begun to do this, then nothing they plan to do will be impossible for them” (Genesis 11:6).

God didn’t wait for the people of Babel to “plan to do” even more arrogant, selfish deeds. He “confuse[d] their language so they [would] not understand each other” (Genesis 11:7). Then “the LORD scattered them from there over all the earth, and they stopped building the city” (Genesis 11:8).

There is a lesson here for all who seek to make “a name for ourselves.” Such self-centered arrogance inevitably leads to division and failure—whether in a family, a sports team, a business, a church, or an entire civilization.

Those who want to make a name for “ourselves” naturally tend to treat others in ways that cause jealousy, quarreling, persecution, and fighting. Confusion results. Scattering comes.

Whatever tower they wanted to build is “gone with the wind.” Such a fate overtook the Soviet Union for persecuting Christians, the Nazis for exterminating Jews, and the Confederacy for enslaving Africans.

Therefore, when Abraham set off for the Promised Land, he already knew that no enduring civilization can be based on arrogance or selfishness. The fate of the Tower of Babel taught Abraham the impossibility of building any “tower” by arrogantly challenging the authority of God and by selfishly ignoring the needs of other people.

Furthermore, Abraham’s call to be a “great nation” (Genesis 12:2) by blessing “all peoples on earth” (Genesis 12:3) shows how God’s way of making “a great nation”—a good civilization—is totally different from the flawed approaches of Nimrod and Babel.

Nimrod “grew to be a mighty warrior on the earth” (Genesis 10:8). But God did not suggest that military prowess should play any role in helping Abraham become a “great nation.”

In Babel, people worked to make a name for themselves. But Abraham’s faith relied on God’s promise: “I will make your name great” (Genesis 12:2).

Nimrod and Babel did not understand what makes people, nations, and civilizations “great.”

Greatness does not come from winning wars.

Greatness does not come from building the tallest “tower.”

Greatness comes from being a blessing to other people.

Greatness comes from having the faith to go to that “Promised Land” where “all peoples on earth will be blessed through you” (Genesis 12:3).

This blog is based on pages 23-25 of my book The Promised Land. Notes related to this blog are printed in The Promised Land as endnotes under the heading “Nimrod’s Wars and the Tower of Babel’s Arrogant Selfishness.”

The goal of establishing a civilization that is good—that is very good—is set forth in the “Prologue: Creating, Destroying and Saving Civilization” that immediately precedes the passage of The Promised Land that is set forth in this blog. It provides an overview of the first ten chapters of Genesis.

The theme of “establishing the work of your hands” that I refer to in the ninth paragraph from the end of this blog is developed extensively in PART TWO of The Promised Land that is based on the life of Moses.

The theme of “hoping in the LORD” that I refer to in the third and fifth paragraphs of this blog is developed extensively in my book Hoping in the LORD that is based on the four Gospels. 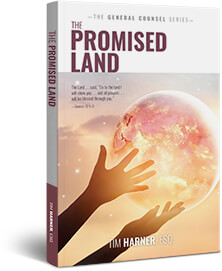