It takes an inspiring vision of a bright future in order to get people to lay aside their disagreements and hatreds, and to work together for that bright future.

Because visions of what America should become and of what the Church should become are essential to end the divisions that plague the United States and all Humanity.1

A pastor2 once imparted this wisdom to me: the only way to overcome divisions between people is to give them a vision of the future that makes them want to overcome their divisions. He had gained his wisdom by counseling people over many years and in many circumstances, including marriages that were crumbling.

This conversation took place almost 40 years ago. I don’t recall exactly what prompted this insight. Perhaps we were discussing the dangers of nuclear war. Perhaps we were discussing the intractable, never-ending violence spawned by religion and nationalism in places such as Northern Ireland and the Middle East. (Thankfully, a vision of a peaceful future has now ended the violence in Northern Ireland.)

As a lawyer, I expressed my belief that it ought to be possible to negotiate an end to such strife because it is clearly in the best interests of all the parties to get along with each other. But from his many years of counseling people, my pastor commented that people rarely overcome their differences by rationally considering their mutual self-interests.

He had learned that, whether it is a marriage on the rocks, a disagreement about running the church, or people ending centuries of warfare, it takes an inspiring vision of a bright future in order to get people to lay aside their disagreements and hatreds, and to work together for that bright future.

Now that I am older and wiser, I see more clearly the truth of what my pastor told me. I’m much more familiar with how people become irrational—even violent—when they feel they have been mistreated.

Furthermore, his insight aligns with things I’ve read and seen about leading a business or any other organization. To be successful, there must be a strong, unifying vision to inspire the people affected.

My vision of America paraphrases the plaque that Apollo 11 left on the moon:

We come with Joy and Peace for all Humanity.

My vision of the Church rests on the words of Jesus and of the prophet Zechariah:

This blog is based on pages 77-79 of my book, Lighting the World.

This blog is related to the blog titled “Overcoming Divisions?” posted in the category: Visions of America.

The pastor was the Rev. Ed Deichler who married my wife and me at First Baptist Church in Brockport in 1982. 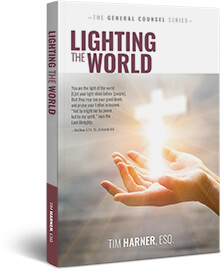